In their latest algorithm change, Facebook are cracking down on spam. The social network will focus on 3 practises that are clogging up news feeds, as part of their wider aim to improve the quality of user experience on the platform. As stated in their latest blog post, the network aims to reduce the prominence of like-bating, duplicate content and spammy links.

Like-baiting is the term for posting images, videos or links that encourage or ask for likes and shares. This content is posted with the aim of it circulating more widely than usual and in Facebook’s eyes, is seen as a cheat of the system.
Calls to action such as ‘like if you love bunnies or share if you love chicks’ can help to thrust posts to the top of news feeds, meaning they get a much wider reach. With low-quality posts like these taking prominence, more relevant content is drowned out, leading to a less enjoyable experience on the network. In fact, feedback has shown that users regard these types of stories as 15% relevant than other posts which receive a similar amount of engagement.
In the spirit of Easter, here’s our mock-up of like-bait: 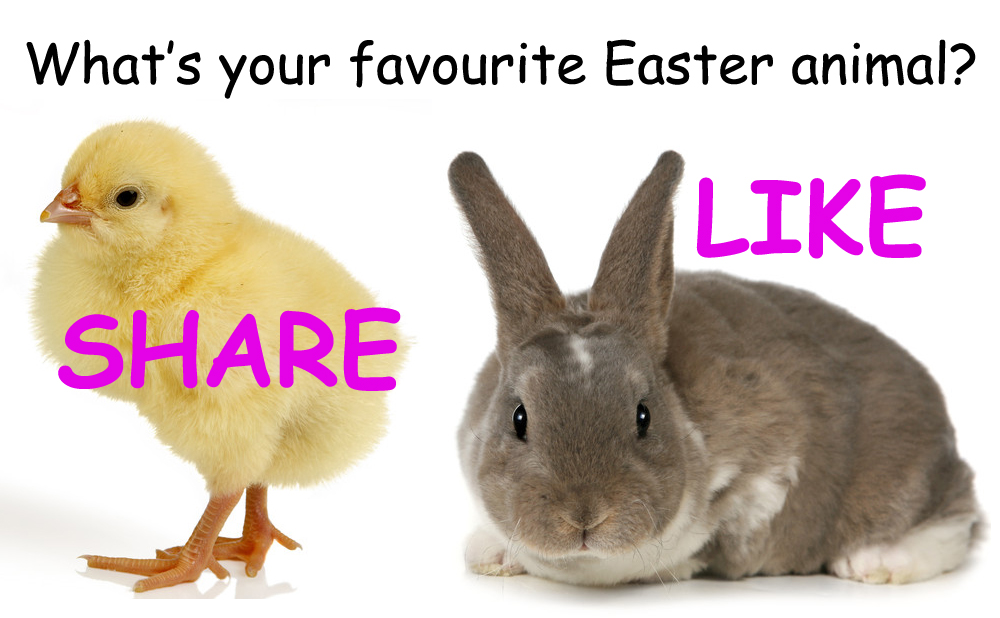 Facebook will de-emphasise content that is posted by people or pages multiple times. User feedback has shown that this content loses its relevancy the more it shows up and causes users to complain. During early testing, the network has recorded that with less duplicate content showing up in feeds, users are hiding up to 10% fewer stories.

Many stories in news feed often use misleading language to encourage clicks through to pages that include frequently circulated content or ads. A typical example of this is a link to a photo album titled ‘The Funniest Images Ever’ which actually takes the viewer to a website full of ads.
Facebook can measure whether users further engage with the post (with a like or comment) after clicking through. If a link doesn’t receive high engagement then this sends signals to Facebook that the post could be spammy, enabling them to reduce the visibility of this content in feeds. During early testing, the network has already reported a 5% increase in people clicking off-site links  – a great improvement that shows users are finding the remaining content in their feeds appropriate and trustworthy.
Essentially, Facebook are upping their game to better detect low-quality content and block it from reaching a prominent position in news feeds. The company have stated that this move is aimed towards providing users with the right content at the right time and that it won’t affect pages which genuinely encourage discussion.
What do you think about Facebook’s latest move? Is this good news? Share your thoughts with us below…