‘Selfie’ – the term that has made it possible to post frequent self-portraits on social media without seeming absurdly vain. Yes, we’ve all seen them: the so-called casual ‘no make up’ selfie, the pouty close-up, the high-angle shots of ripped male bodies captioned ‘been to the gym’ and the double portrait shots of friends pulling faces. Even celebs have got on the bandwagon with Jessie J, Justin Bieber and Ellie Goulding just some of the names guilty of a good old take-your-own-picture. 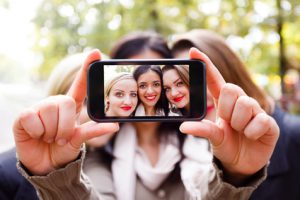 Yes, selfies have been cluttering up our social media channels for a while but now the slang word has reached new heights as it has been named Word of the Year by the Oxford English Dictionary.
This award celebrates how English speakers adapt and invent their language according to social, political or technological changes and trends. To qualify, a word must have become prominently popular within the past year. So, how did the selfie’s rise to fame begin?
The term originated over a decade ago in 2002, ‘down-under’ in Australia, when a young drunk used the slang online to describe a self-portrait. Since then the word has grown in momentum, to coincide with the introduction of front-facing cameras on phones, apps such as Instagram that enable one to beautify their portrait with an effect and the increased use of the hashtag. In 2012 ‘selfie’ became known as a buzzword and in the past year the word has gone madly mainstream with its use in the English language increasing by a massive 17,000%.
Now, over 51% of the UK have taken a selfie with a surprising 29% of this lot ‘selfie-ing’ over the age of 65. Plus, Facebook is still the most popular platform to share with 48% posting their selfies here compared to 9% on Twitter and 8% on Instagram.
Our social media world is exploding with images of people’s faces but what’s next? Are we to live in a world where our language deteriorates into a litter of slang and abbreviations or is this all part and parcel of good, modern change?