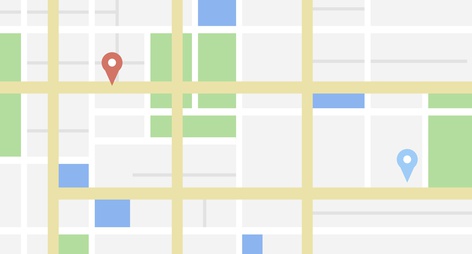 According to a recent report by Google, a whopping 97% of consumers will search for business information online. While a website acts as a 24/7 calling card for your business, there are several other things you need to set-up in order to have a strong online presence. Google maps is a powerful tool for business owners, particularity for anyone who owns retail-based businesses or restaurants. We reveal three reasons why every business needs to be on Google maps.

In order to have your business registered on Google Maps, you will first need to ‘claim it’ on Google Places. The Google places for Business tool lets you search for your business name and address, as it may already be registered by Google. If it is not showing up, you can follow the step-by-step instruction to register your business, and then claim it. Double check that all of your business information, links, opening times, and location on the map are up to date before you submit. Registering and claiming a business is free of charge, but you will need to have a Gmail account.

Perhaps the most obvious of benefits, is that a listing on Google Maps will instantly …

In the single largest update to their maps service, Google have incorporated data for public transport across England, Scotland and Wales. Users can now head to the platform for information about the departure times, routes and number of stops for trains, buses and ferries across the country.

Google Maps isn’t the first app to offer this type of information, with Rome2Rio’s UK Transport Search just one of the other services providing similar coverage. Yet, because of Google’s already huge popularity, the move won’t go unnoticed and is unlikely to go underused.

Before this shake-up, the app did provide some transport data for parts of Great Britain but lacked coverage for much of Wales, the Midlands and northern England. Some searches didn’t bring up any results at all, no matter how short and simple the routes between destinations. These gaps have now been plugged with the help of Traveline’s data.

In total, up to date schedules from nearly 1,500 different transport operators have been incorporated, including more than 333,000 departure points and 17,000 different routes. This translates to every single bus, train and ferry travelling anywhere between Land’s End and John O’Groats. Google also provides information for different routes so users …

Great isn’t it – strolling the streets of Paris, checking out a Chinese market or even finding it far too fun to walk next to your house. With Google Street View you can travel the world without moving from your seat – well, you can travel with your eyes anyway.

And now you can even spend (or waste) your time browsing the insides of buildings as Google will be rolling out Street View (or building view) for transportation hubs all around the world, including Gatwick airport, London’s mainline train stations as well as airports, train and subway stations across Europe, Asia and the U.S. You can even head inside an Emirates Airbus A380 on the Dubai International Airport runway.

We know, they’re hardly the most scenic of locations, but Google is pitching these new additions as a handy feature for tourists. Travellers can preview where they’ll be departing from and where they’ll be arriving, helping them to get familiar with their journey. Just think – you can use Street View to find your airport terminal and check-in desk before you’ve even left the house.